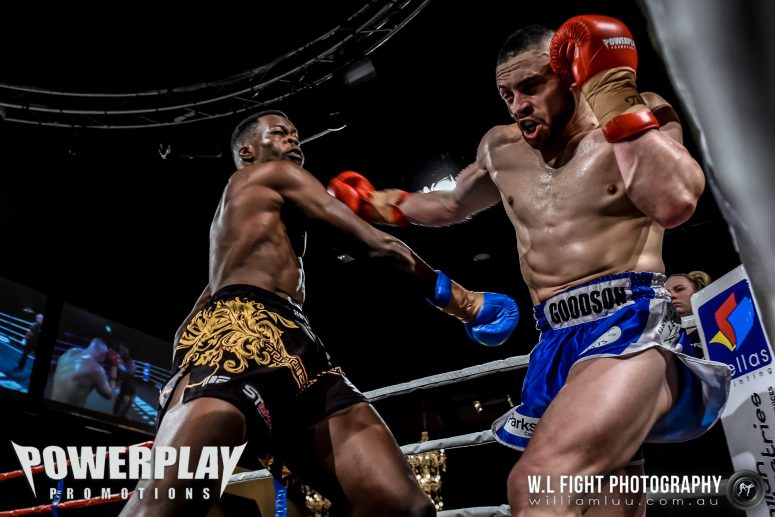 Coming off an emphatic victory at Powerplay 39, the wave of momentum that Melbourne’s Aaron Goodson continues to ride now better represents a tidal-wave of momentum. The tidal-wave however is going to run straight into a concrete wall come Powerplay 40 when Aaron stands opposed to kickboxing sensation and multiple time World Champion Steve Moxon. Only time will tell if the tidal-wave will be strong enough to break through the concrete and continue on its devastating path.

But first back to Powerplay 39 where Aaron took on the unquestionably durable Tyson Turner. Aaron’s victory on that evening can be described as nothing less than decisive and although satisfied, Aaron was definitely complimentary as to the toughness of his opponent:

“Tyson Turner was one tough fighter! I didn’t find him hard to fight he just had very hard head…”

Based on Tyson’s toughness, Aaron was unable to find the finish albeit he threw everything at Tyson, including the kitchen sink, in order to do so. For those who watched Aaron apply his craft, it was clear that he controlled the centre of the ring and diversified his combinations leaving Tyson guessing all fight; a perfectly executed game plan it would seem:

Ever since that victory, Tyson has been carefully rejuvenating his body in preparation for whatever challenge presents itself next. A consummate professional, Aaron is all too aware that taking care of his body post fight is the initial key to success in the next, even if it means confronting the torturous ice bath over and over again:

“Yes, I love an ice bath! Recovery & rest is just as important as training! I try to have an ice bath after every intense session”

The next test for Aaron however will be far more intense than any ice bath he has experienced in the past, and that test will come in the form of Steve Moxon. Giving up a wealth of experience Aaron will have to overcome a multitude of barriers if he is to conquer the mountainous challenge ahead:

“Steve’s had nearly triple the amount of fights I’ve had. His fought some of the biggest names on the planet… this will be a huge step up for me but at the same time it’s time to step up and start fighting the big guns and for a world title it’s even greater”

Aaron’s run of impressive victories coupled with some spectacular performances has rendered him one of the brightest prospects in the sport. Many observers, including this writer, would share that perception however it’s probably safe to say that Steve doesn’t agree. In fact, Steve feels that Aaron may be a bright prospect in Nth Melbourne but that’s it, a comment that Aaron has really brushed off:

“Lol I respect Steve, I actually used to look up to Steve and thought really high of him. I’m looking forward to fighting Steve; I’m a fighter, I’m here to fight this is what I do. I believe I have what it takes to beat him and take my fighting to another level”

Even though Aaron has been through numerous fight camps, preparing for a fighter as experienced as Steve may require him to slightly adjust some elements so as to ensure he covers all bases and ticks all the boxes. These adjustments however will remain within the inner sanctum until the plan is implemented on fight night:

This particular fight camp of which will have such a huge influence on the outcome of the fight, will be overseen by familiar faces whom for a long time have assisted Aaron to ensure he is physically and mentally prepared for whatever Steve brings on fight night:

“I have a great camp & an awesome bunch supporting me and pushing me through some elite training & different training methods. My key coaches for this fight will be my main coach Joe Nader, my strength & conditioning coaches Ned Vrselja & Judd Reid; sparring partner & UFC champion Jake Mathews & my stable brothers from Powerplay Fight Club”

Both combatants encompass an arsenal of weapons to which they each believe will be the defining factor in this fight as it applies to earning a colossal ‘W’. In Aaron’s case, he believes his power will be the difference; power that will inevitably break Steve:

Regardless of the stage and status of one’s career, a world title is a big deal and brings with it validation that you are one of the very best in the sport. The winner of this much anticipated contest will earn the right to have that title draped over their shoulder, and for Aaron that is something that would be a true honour:

“Yeah for sure a world title is huge it means a lot! Another stepping stone to being up there with the big names & that would be an honour. Can’t wait for March 23!!

“Also a Big shout out to my major sponsors:”