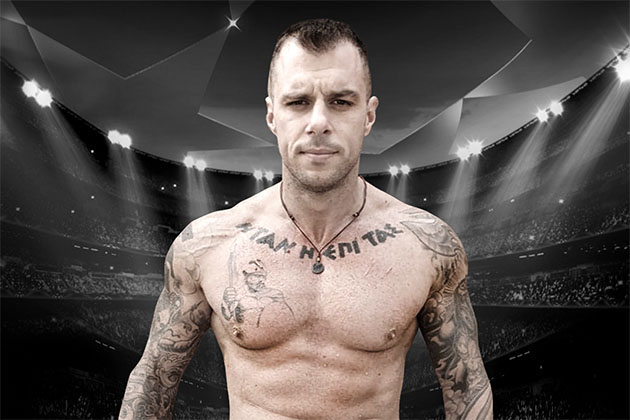 The average fight fan, no matter how impressive their intellect is as it applies to combat sports, would be lying if they said they didn’t enjoy a couple of heavy hitters throwing legitimate bombs at each other. For those fans, you’ll be excited to learn that Powerplay 41 will deliver just that when Chris Vlahogiannis takes on Manachai.

For Victoria’s Chris Vlahogiannis Powerplay 41 will bring with it a number of firsts, but before we dive into the detail it’s important to understand the journey that this talented martial artist has been on prior to this monumental moment in his career:

“I did a decent amount of boxing when I was a teenager through to my early 20’s. Originally started boxing under Percy Lanciano & then in my 20’s learned through Tom Goussis. I have had no amateur fight experience, I tried a few times but it was always hard to find an opponent at heavyweight”

When August 31 finally rolls around Chris will make his long awaited debut in a Heavyweight K1 contest that has the collective mouths of fight fans watering. Prior to their debut a martial artist will experience a range of emotions, and this is no different for Chris:

“I’m feeling a lot of excitement. At the start of 2019 I put up a list of goals I wanted to achieve in 2019, and on the very top was “HAVE MY FIRST PRO FIGHT”. Life is about challenging yourself and doing things which are out of your comfort zone, this is something I have wanted to do for a long time so I’m just enjoying the ride, the journey and having a lot of fun along the way”

“I am truly honoured and grateful to both Joe & Demi Nader for having me fight on one of the biggest shows in the country. I have been going to Powerplay shows as a fan from the days when John Wayne Parr was main eventing against Mike Zambidis. So the fact I am fighting under the Powerplay brand is a true honour and I will be forever grateful“

Chris’s debut fight will be shared with a dangerous Thai fighter in the form of Manachai. This opponent can only be classified as formidable however displaying experience beyond his years, Chris is well aware of the challenges that await come August 31:

“I don’t underestimate any opponent. He has had 6 fights, 6 wins and 4 KO’s… that is a seriously awesome record. He has been in the ring 6 times more than me so I must respect his fight game“

As Chris has alluded to, Manachai has a 66% knock out ratio which in combat sports terms equates to a lot of his opponents taking a nap in the middle of the ring. This awareness will help Chris to develop a game plan to negate the KO power, however if this inevitably turns into a power punching battle, Chris feels as though he’ll still have the advantage:

“I honestly believe I hit harder than Manachai. I also believe he hasn’t been hit by anyone as hard as me. We are going to have a war and whoever is more prepared for war will win. I believe I am much more prepared then he is for this war!”

Whilst Chris will obviously prepare for the strengths his opponent will bring to the contest, Chris will also have a number of tools and advantages that he believes will ultimately render the outcome he desires. These advantages can be summarised in four simple words:

That desired outcome may eventually be achieved at Powerplay 41 however the ground work is well underway in the form of a structured and technical training camp. For Chris, the training camp is underpinned by a sense of diversity with regular cameos from one of the very best in the sport:

“Training camp involves a lot of sparring with different opponents, pad work, drills in the evenings. Morning training involves strength & conditioning, running, bike riding, rowing, stretching, core & glute work, weights. A lot of different activities to create an all rounded athlete. Sometimes we focus on explosive workouts and other times on endurance. I am very grateful I have the best team around me in Australia and I am very grateful I have been a part of two training camps now with Aaron Goodson so I am preparing with the very best out there and also learning off the very best”

The training camp will be overseen by a legitimate icon of the sport in the form of Joe Nader. Whilst Joe will be the main driver there are numerous other key people whom Chris will rely on to get him ready for the fight of his life:

“I train at two different gyms. North Melbourne Boxing & Fitness under the Powerplay Fight Club brand and also Judd Reid’s Chikara dojo in Footscray. My key trainer is Joe Nader who in my eyes is the very best trainer in Australia. He has taught me everything from my footwork, my technique, my combinations, my fight style & my strategies. Without him I wouldn’t even attempt to fight on such a prestigious show without any amateur fights but it is the confidence he has instilled in me which is the reason why I am doing this with no fear & full of confidence”

“I am also training with Judd Reid. He is a legend of the martial arts world and is the only man to have won a World Kumite World Heavyweight Title, completed the 1000 day live in student “uchi deshi” under Sosai Mas Oyama & completed the 100 man kumite which is definitely the most difficult martial arts event known to man. He is a legend of the sport and I am grateful he is there to help me with conditioning of the mind & body”

“I am also training with Ned Vrselja aka “The Soldier” who helps me with all strength & conditioning. He is the reason why I am in physically and mentally the best shape of my life, there is no one in Australia or on this planet that trains harder & with more discipline then Ned. It is truly inspiring at the physical shape he has helped me find a inner strength I never knew existed in my mind, body and soul”

“Michelle Reeves is the best nutritionist in Australia, after seeing what she done with Aaron Goodson and how she transformed his body through proper nutrition against Steve Moxon I had to jump on. I was using other nutritionists who didn’t have a clue what they were on about and since I have been with Michelle Reeves I am leaner than ever with also more energy than ever”

“Lastly, my training partners and brothers Aaron Goodson, Tristan Papadopoulos, Nazir Haddara, Rob Minneti, Mohamed Eldimerdash and all the other Powerplay fight club boys. Without them I wouldn’t be anywhere and I owe everything to these boys who train with me day in day out every single day. Doing the entire training camp with Aaron Goodson has been an eye opening experience for me, we did everything together, we sparred each other, morning runs, strength and conditioning, hot and cold bath’s, sauna’s, etc I learnt a lot through Aaron, the sacrifices he makes every single day to be where he is and to fight at the level that he fights at. It is truly awe inspiring to see someone with so much dedication and also take me under his wing and teach me how he does it. I always say, if you want to be a lion you must hunt with lions. My team are the Kings of the Jungle in the fight game in Australia…. each and every one of them are lions and once again I am grateful and honoured to be surrounded by them all”

So the preparation is almost complete; the mindset is perfect and the body is feeling the best it ever has. On that basis Chris cannot wait for August 31 and with that a final word for this debutant warrior:

“I’m prepared for war, kill or be killed!!! You will have to wait and see. OSU!”